Returning home as an essential part of travel

Seeing the world with new eyes

Before I even returned home from bicycling the world, I wondered if I would see everything in a new light of wisdom. Even while I traveled, people would ask me, “After what you have done, how will you ever be happy going back home?” It was a good question. I’ve been thinking about it for years. This is why I created my Backyard Adventures series because now I truly believe you need go no further than your backyard to find an adventure. Below, I talk about my journey to enjoy the little things in life.

Update 2017: In the 10-year anniversary edition of my award-winning, travel memoir, I consolidated my thinking into a new afterword. Spoiler alert: I really did learn to see the world differently in a surprising way. (If you already bought the book, you can find the new chapter by following the link to bonus material online.)

In 2009, I shared my discoveries about returning home on Around the World Travel Radio.

Conventional wisdom says that you can never return home. In a way, this is true. Both I have changed, and my home has changed. It is a most interesting phenomenon to see the same old thing with a whole new understanding. Marcel Proust is attributed to have said, “The real voyage of discovery consists not in seeing new sights, but in looking with new eyes,” though that may be a summary. Perhaps, T.S. Eliot says it best.

And the end of all our exploring
Will be to arrive where we started
And know the place for the first time.

Here is a similar idea for anywhere we go, including going home, maybe especially so.

One’s destination is never a place, but a new way of seeing things.

This is a quote that I found while actually returning home.

There is nothing like returning to a place that remains unchanged to find the ways in which you yourself have altered.

And, Washington Irving has this to say about returning home:

He had now entered the skirts of the village. A troop of strange children ran at his heels, hooting after him, and pointing at his gray beard. The dogs, too, not one of which he recognized for an old acquaintance, barked at him as he passed. The very village was altered: it was larger and more populous. There were rows of houses which he had never seen before, and those which had been his familiar haunts had disappeared. Strange names were over the doors—strange faces at the windows—everything was strange. His mind now misgave him; he began to doubt whether both he and the world around him were not bewitched. Surely this was his native village, which he had left but a day before. There stood the Kaatskill mountains—there ran the silver Hudson at a distance—there was every hill and dale precisely as it had always been—Rip was sorely perplexed— “That flagon last night,” thought he, “has addled my poor head sadly!”

When I returned, I cycled across Wisconsin to see how it compared to cycling around the world. I wondered, “Have my world travels spoiled my appreciation for the little things?” I call it the coast-to-coast tour, from the Mississippi River to Lake Michigan. You can cycle almost the whole way on bicycle trails. One of the best sections here, and in the world, is the Elroy-Sparta Trail. Home of the first rails-to-trails project and some scary tunnels. Here are a few highlights. I would have done a lot more filming but forgot to bring a tripod. Wish I would have done this for my world bike tour. Below is a short video.

One of the challenges of returning home after a great adventure is learning how to enjoy the little things in life. I didn’t have high hopes for going to the county fair, but I was surprised to have one of the best days of my life. It was the 170th year of the Waukesha County Fair in Wisconsin, and it was full of mini-adventures including: all-you-can-drink chocolate milk for a dollar, fancy chicken show, Ferris wheel, Foreigner, a childhood favorite band was playing… And it all started with seeing six Bengal tigers perform tricks.

Above, I am feeding a Bengal Tiger a small piece of beef. This is a female who is about the same size as me at 200 lbs. The male tigers weigh 3 times as much and it is all muscle and teeth! Coincidentally I wore my tiger-striped shirt from Rajasthan, India.

It is estimated that there are only 3500 tigers left in the wild and they will go extinct in 10-30 years. I don’t like zoos or circuses, but they may be the ones responsible for saving the tigers, just as the American beef farmers were responsible for saving the bison. For anyone who has read my book, you know that I am one of the few people alive that has seen a wild tiger. It was the most exciting 5 seconds of my life. Previous to seeing the tiger, it saw me as I scared one away from its breakfast. A deer that it had killed just a few hundred meters away from my cabin. Seeing the kill and the fresh footprints put a scare into the locals. Luckily I wasn’t second breakfast :)

I also won a giant stuffed parrot in the BB machine gun game. I had to obliterate the star in the middle of the paper. And then I gave the prize to a pretty lady. It made me feel like a man. Is there a guy who hasn’t had this dream?

Who knew my homeland could be so fun and adventurous? 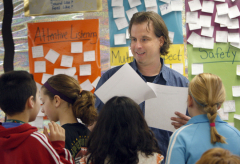 World traveler came home to fulfillment. This is a great story about my trip around the world, coming home, and how this all evolved into working with local schools to illustrate children’s books. 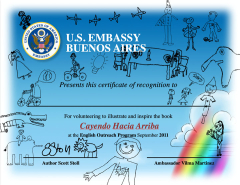 I’m very excited. This Thursday the Ambassador to Argentina will be visiting some elementary schools in Buenos Aires to read the new Spanish edition of my children’s book. The kids will be receiving their own copy of the book and the certificate of recognition pictured above. 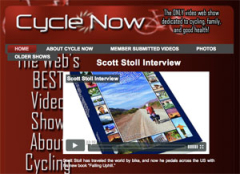 Here’s a Skype interview done by Rick Owens, a guy that is truly passionate about everything bicycles. With my experience in the world of websites and video, I can attest that he puts far more effort into these videos than is apparent.