What kind of bicycle did you ride around the world

My bicycle is more famous than I am

My bike, Yerba Mate — yes, that its name. I asked it one day, and it pointed to my cup of tea. And, yes, people always ask what is the name of my bike as if it’s a person. My bike is quite famous. It has been photographed more than I have. Often I stand next to my bike and people politely tell me to get out of the frame. My bike has been requested to appear on TV numerous times, featured in newspaper articles (without me), been photographed 1000’s of times and Yerba has even won a place on the race podium without having to win a race.

I owe a lot of fame to meeting Stephen Regenold, the Gear Junkie, last summer in Minneapolis. I admire how he turned his love of gadgets into a profitable career, which is essentially the art of creating an adventure in your own backyard. In fact, he just returned from competing in the Wenger Patagonian Expedition Race, the “toughest and wildest race on Earth.”

The Gear Junkie featured my bicycle in his nationally syndicated newspaper column including Outside Magazine. The story was great. So often journalists get it wrong. Also, it has had a very big impact, much more so than any other story in newspapers, TV or radio. So that’s a testament to the power of a passionate blogger. Read the story about The Bike that went Around the World.

What kind of bike did you ride?

One of the most popular questions asked these days: Is that the same bike? (The most popular question regarding my bike used to be: How many flat tires do you get? Or, Doesn’t your butt hurt?) It reminds me of a joke: I’ve had this ax my entire life. I’ve only replaced the handle 3 times and the head twice. Everything on my bike has been replaced but the frame, handlebars, cranks and surprisingly the aluminum rear rack. But those are almost ready to go. The frame is more or less okay, except for some potential corrosion, but if that gets replaced, will it still be the same bike? What about my body? Is that the same body I had when I started the trip?

So far this bike has about 33,000 miles and it’s still going. It’s a Gunnar mountain bike with a steel frame and components customized for heavy touring on the road. I have a peculiar love for my bike as if it were a real person. In fact, I think it has a life of its own. It’s enormously popular. Everywhere I go people want me to bring my bike. They ooh and aah and run their hands down the frames, caressing the nicks and scratches.

Recently it was rebuilt courtesy of Shelley and Forrest Smith. If being a bike mechanic is not an art form, it is certainly beautiful to watch a talented bike mechanic strip down a bike and rebuild it bolt by bolt and spoke by spoke.

You can view the slideshow below with some interesting descriptions of each slide. Among other things, you’ll see the box of worn-out parts. It’s amazing the wear and tear a bike goes through. By brute determination and sheer human power, I’ve worn down steel, cracked aluminum, snapped titanium, and rubbed my handlebars smooth as glass with my hands, I feel like I left a trail of metal dust around the world.

Thanks to Forrest my steel horse has never been better. I think he must dirt from over 59 countries on the floor of his workshop. (PS. Forrest, save the dirt; and can you build a pare of spare knees?)

How to choose a touring bicycle

People often ask me, “What touring bicycle do you recommend?” I’ve seen such odd bikes that I genuinely believe that you could ride almost any bike around the world. That being said, the latest and greatest racing-gadget mind frame is antithetical to touring. You want a bike that’s more like a trusty workhorse.

My bike was made by Waterford Precision Cycles in Wisconsin. (I’m hoping that they’ll be able to make me a stainless steel bike next time.) Yerba and I got a personal tour of the factory and met the owner, Richard Schwinn, and the man who made my bike. He said, “Don’t get me wrong, this is a great bike, but you shouldn’t have been able to do what you did.” I replied: “So, I’ve heard….”

The key factor for me in deciding which bike to purchase was a combination of strength, longevity and riding position, thus the mountain bike with a more relaxed handlebar position. Touring is not a race. I have ridden a Trek touring bike and did not like being in that cramped position with drop bars. An essential factor was riding a steel bike, just in case it somehow got damaged any welder would be able to fix it. I also prefer the feel of riding a steel bike.

I did miss some of the extra’s that touring bikes have to offer; for example, 3 water bottle mounts are essential. And the bike got a little wobbly if I carried too much weight. And it was very slow. But it could go and off roads without a problem, and there were times the roads were literally rivers. I can’t imagine using a touring bike with 700 cc wheels.

The braze-ons are another key factor. On most bikes, the eyelets are just stuck on with some brass. Appearing like an “0” sitting on a flat surface. They will eventually snap off. What you want is the dropout, where the wheels attach and they eyelets, to be all one piece of machine-tooled metal. If not, make sure the braze-on uses a lot of brass filling in all the spaces, so that it looks more like a triangle (with a hole in the middle) sitting on a flat surface. And attached to all that you’ll want the best steel racks for your panniers.

I would absolutely get a frame geometry for 26″ wheels. I’d even use downhill mountain racing deep-dish, double-walled rims with at least 36 spokes. Get the strongest wheels possible. Trust me on that one.

And for a list of the hundreds of items and hundred pounds of gear that this bike carried around the world, visit the Supply List.

And if your hankering for even more about the bike, please read about Yerba Mate in the Gear Junkie’s, nationally syndicated newspaper column. The Bike that went Around the World. 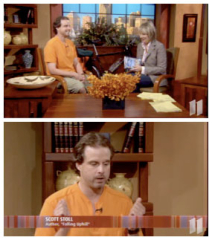 My latest interview. About 30 seconds per year of my life. 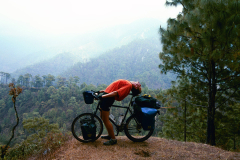 Today’s interview is with Scott Stoll, author of the book Falling Uphill, founder of the adventure travel community The Argonauts, and perpetual traveler. He’s currently cycling around the world. 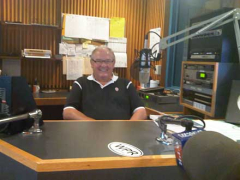 I had another great interview on WPR’s Larry Meiller program. We talked a little about my trip around the world on a bicycle, and a lot about working on the new school book project.