Leggett: a small town full of California hillbillies, one guy at least who is drinking while driving and even assisted by another motorist to lend a bottle opener, and a town made famous for the drive-thru redwood tree, which I bicycled through. Not really sure who thought that was the shortest route from A to B, but the tree has since become a tourist attraction and earns about $300 an hour, which is about $297 more per hour than me.

I’m relieved to be away from the chilly foggy coastal headwinds and in the peaceful redwood forests, one of my favorite places on the planet. I even impressed myself by riding fairly easily up a 12-mile hill at 6-7%. I’m starting to get strong again.

Speaking of hillbillies, also met a truly crazy Vietnam Vet who nicknamed himself E.T. A guy that genuinely made my skin crawl. And after traveling the world, that says a lot.

“You’re not from around here are you?” I jested.

He claimed to be a sniper who made his own bullets out of wood so that they couldn’t be traced. He said, “I never hurt a child. I don’t rape women. And I ain’t never killed nobody that didn’t deserve to die.” He told me as I began to regret my invitation to a fire and beer.

He pulled down his sunglasses and glared at me with one good eye and one glass eye. “You’d better watch yourself young blood. I ain’t one you wanna be making angry. I’m a half-breed, half Seminole Indian and I got a bad temper cuz of it.”

“For future reference, If I make you mad, just assume it was a mistake,” I said.

“I do. That’s why you’re still standing.”

E.T. prowled around the campground like a junkyard dog with a beer in hand chatting with every passerby in his growly voice. Needless to say, he pretty much scared everyone away, except me. And for me, he seemed to have endless stories of intimidation about the war and being a P.O.W. and growing up in the Louisiana bush. I figured ironically or not-so-ironically, he must have found me extra-intimidating, especially after the other bicyclists made excuses and disappeared like scared cats. More than once he bulldogged me into a corner and I played dumb, my favorite self-defense, but most people just want a little respect, so when I growled in pseudo-Louisiana grumble, “You’re one tough little son-of-a-bitch.” I was suddenly befriended, and he traded in my dead soldier for another pineapple, meaning my beer can.

And why did I go to all this trouble? Well, one thing I’ve discovered about crazy people is that more than half the reason they went crazy is because they’ve seen a bit of reality that they couldn’t handle looking at, a tiny piece of truth that most of us spend our entire lives avoiding, even afraid to glance in the general direction.

So, what was the truth ET saw? In my opinion, he saw that any one of us could be brainwashed into killing machines thinking we’re doing the world a favor, and after seeing the horrors of war, returning to artificial culture where no one understood or even cared and sometimes condemned what he had gone through in the name of protecting his grandfather’s homeland.

And another truth ET found, “When my spirit goes bad, possessed by evil spirits, I stop everything I’m doing, smell the roses, and count my blessings.” 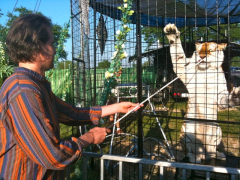 Returning home as an essential part of travel

An introduction to enjoying the little things in life and finding an adventure right in your own backyard. Before I even returned home from bicycling the world, I wondered if I would see everything in a new light of wisdom, or whether I might die of boredom. 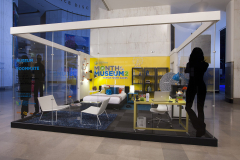 Roommate at the Museum of Science and Industry

Once again I have applied to be a roommate at the Chicago Museum of Science and Industry. Above you see what would be my bedroom. I also imagine my bicycle, the bicycle that went around the world, occupying a very important corner, along with some maps and photos. I considered my journey as an empirical study of the meaning of life.

Here is video application to be a roommate at the Chicago Museum of Science and Industry. 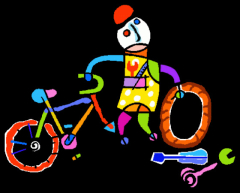 One of the most popular questions people continue to ask me is: “What are you going to do next?”

Toleration is the greatest gift of the mind; it requires the same effort of the brain that it takes to balance oneself on a bicycle.