Editor’s Note: These photographs may look old-fashioned now, but when we first started posting photos most images were scanned in from film negatives, which has a very different color gamut than digital, and the resolution on the internet was very poor. Images needed to be only a few kilobytes so that you could download them with a phone modem; now they are hundreds of times bigger. Learn more about our original film photographs. Fortunately, I found the original images for this pictorial. I hope you enjoy this trip back in time.

This tiny picture of Chac-Mool is an example of the size that we originally uploaded to our website. It’s 250 pixels wide and only 9 kilobytes in size, which means most of the detail has been lost and it looks a bit blurry. Below if you click on an image, you can see an even bigger version. Even with all our pictures at this size, our pictorials were bigger than the recommended size for dial-up modems which was 64 KB for the whole page!

For many Americans, our sunny neighbor to the south is simply one big vacation package destination, to which we depart for 1- to 2-week getaways from our 9-to-5 jobs. Simply select the dates, decide on a budget and pick a beach. Upon arrival, we lie by the hotel pool and drink cheap margaritas, believing that we are experiencing Mexico. For some, “Mex” begins and ends with the seedy, drunken-American-college-student-infested bars of Tijuana. However, in spite of the fact that many of our friends are traveling to Mexico and completely missing out on the place, for the Argonaut, there is a land rich in culture and interest, evidence of which is usually not far from even the most heavily trafficked tourist haunts.

Take Cancun for instance with its cramped, commercial hotel row interspersed with the likes of Planet Hollywood, Hard Rock Cafe, etc., and occasionally host to such evils as MTV Spring Break. Within a day’s drive from Cancun is almost the entirety of the Yucatan Peninsula: a large, impossibly flat, tropical wilderness bathed in natural beauty and dotted with the remains of one of Earth’s greatest former civilizations – that of the Maya – all under a deep blue Caribbean sky.

Columnist. According to Erik, he has been an intrepid adventure traveler since the age of 5, when he climbed onto his sister’s bicycle, left his family home in Palo Alto without telling a soul and promptly became lost. Now, at age 33, he is constantly exploring the world, except during the 48 weeks per year when he works 8 to 5 as an analyst of sorts for a global investment firm. Not yet possessing the nerve to drop his material world accoutrements, Erik is content to slowly-but-steadily work down his “List of Places I Must Go”. He gets shivers just thinking about Southeast Asia and plans to return soon, this time to Indonesia. Erik currently lives with his wife and daughter in San Francisco. 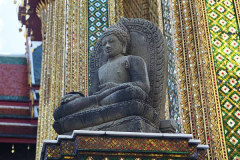 Editor’s Note: These photographs may look old-fashioned now, but when we first started posting photos most images were scanned in from film negatives, which has a very different color gamut than digital, and the resolution on the internet was very poor. Images needed to be only a few kilobytes so that you could download them