I had no wish to cycle in Taiwan – it’s only because a mate of mine teaches English in Taipei. We split mid-2002 after we’d overlanded from England to Singapore over an eleven-month period and 22,000kms together. He left for Taiwan, I went to Germany. Now we were meeting up again – on his turf.

Toby had become fat! We cycled together from Taipei to Sun Moon Lake in the dead centre of Taiwan, over the highest pass on the island at 3,275 metres, and had a bloody great time together. Here he had to get a bus back to Taipei, quite a few pounds lighter, as he had to teach on Monday – I continued through the mountain roads southwards – towards Kenting, Taiwan’s southernmost point.

After another ball-busting hill at +30C, I met Travis, a mental (but nice) Aussie guy on a “borrowed” moped. He’d changed the 3s to 8s with a marker pen on the number place in case the police were looking for the bike! Travis had a length of rope and a sweaty gauntlet, he said he’d pull me up the next big hill. We did 116 miles that day, and 3 big hills. I’d come off my bike 3 times, one arm and leg was caked in blood, and after swapping hands on the rope alternately, both arms felt as if they had been pulled out of their sockets.

Travis spotted a huge monastery and said, “Let’s crash out there, I’ll get some beers from town before we ask. Wait here”. Momentarily forgetting the rope was still wrapped around my hand he sped off, and once again I was thrown to the ground!

The monks allowed us to stay, eat with them, and say prayers. The following day we left early. Travis pulled me to the top of the last big hill and was then off – I’d never see him again, he was to become one of those legendary crazy guys you meet when travelling.

It was 16th July, a lovely day, and I was freewheeling down the mountain and passing through Maolin. From here the road went directly south till it met the coast. There were mountains to my left and the coastal range to my right was getting smaller – the wind picked up from behind, the sky was blue.

Suddenly clouds came over the hills to my left and the wind behind me started to push me like a powerful hand… then it started to piss down big time! I sheltered in a roadside shrine with a couple of old geezers for a while until I realised this storm isn’t going to let up. It must be 20 miles, if that, to the coast… I’ll go for it.

The rain and wind were actually very pleasant, the rain was a much-needed shower, and the wind helped me to cruise at an easy 40mph till I reached the busy coastal highway – no hotels to be seen… I continued in heavy traffic for maybe another 15 miles before finding some beach cabins. I checked into one for the night, complete with resident ants and biting mozzies.

The next day was worse… I found out that I was in the middle of Typhoon Kalmaegi. It was whipping up the east coast, rotating anti-clockwise, so on this coast was blowing south. What the hell! I set off for Kenting, the wind pushing me at record speed, palm trees bent double, sheets of corrugated iron flying over my head, orange flood-waters from the mountains cascading over the road into the sea… Was I crazy? You bet… cycling through a typhoon was better than sex at that moment!

I arrived in Kenting in record time and checked into the shabby DV Hotel, the only window to the world was cable TV. Kenting is a trendy resort, but during this typhoon, it looks like an old English seaside town in January – depressing.

I waited a day for the typhoon to disappear, it didn’t, got restless, and sped off for Taiwan’s most southerly point – an anticlimax. The path down to the obelisk was tiled, wet, and covered in leaves. I was careful on my fully-loaded bike until, about 50ft from the southernmost point when a group of Taiwanese returning from the viewpoint started to run like headless chickens at the sight of me on my bike. I braked – and wiped out! And slid on my arse to land directly at Taiwan’s southernmost point, much to the amusement of the locals!

As for the next 10 days up the Pacific Coast – in one word: Wonderful! Some of the best cycling I’ve ever done. I recommend it to every bikepacker… 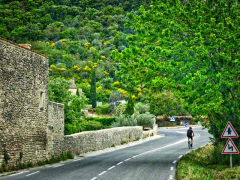 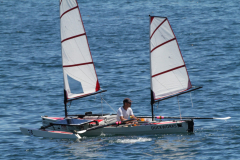 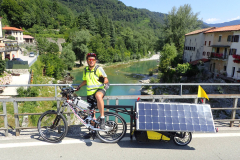