Bicycle Coast to Coast Across America.

“The cyclist creates everything from almost nothing, becoming the most energy-efficient of all animals and machines and, as such, has a [genuine] ability to challenge the entire value system of a society. The bicycle may be too cheap, too available, too healthy, too independent and too equitable for its own good. In an age of excess, it is minimal and has the subversive potential to make people happy in an economy fuelled by consumer discontent.” Jim McGurn

(We traveled on the same road as the first Transcontinental automobile road race in 1934.)

Before leaving the coast, I dipped a plastic vile into the Pacific Ocean for a souvenir to be bookended with a vile from the Atlantic. My memory shelf enjoys six bottles taken before each coast-to-coast ride. My first started at Manhattan Beach in Los Angeles, the second and third bottles started in San Francisco Bay and this fourth bottle took a tiny bit of the ocean at Newport Beach in Oregon.

I am not sure why I do such trivial things, but, over my lifetime, I snagged little trinkets from all over the world. My memory shelf features rocks from Antarctica, a bottle of sand from the Outback of Australia and some pebbles from the Wall of China. I’ve got a trinket from the equator in South America and a bamboo stick from my treks through the Himalaya. When I look back at my life, a big smile crosses my face knowing that I filled up my years with adventures.

(Logging sustains Oregon with jobs and products. Huge swaths of mountains suffer clear cuts which kill off all the habitat for forest creatures. The Spotted Owl may go extinct because of clear-cutting its habitat. As we traveled, logging trucks left millions of chips along the highway.)

With the vile filled, I trailed after my brother Howard and friend Wayne. Can’t help but imagine what great people we shall meet, some great historical places we will see and a number of America’s greatest characters along the way.

To start a new adventure energizes the cells within my body. Every cell knows its meant for greatness. Every blood cell knows it will be called upon. Every muscle understands its role in this gargantuan physical effort. My skin knows it will feel the freezing cold of the mountain passes. My skin will cook under the burning sun. That same skin will sweat in the heat to keep me cool. Above all, my entire body will respond to my demands because I feed it healthy food, copious amounts of water and let it sleep each night to recover from those 60 to 80 mile days in the saddle.

Looking back at the ocean, I imagined seafarers loved exploration the same as I do. Adventure runs deep in the oceans around the world. From the ancient Vikings to Captain Cook’s epic travels around the planet. From the Greeks across the Mediterranean to the Chinese traders out of the Orient. Humans love traveling around the globe. Marco Polo walked around Asia. My friend Scott Stoll, who wrote Falling Uphill, spent five years bicycling 25,000 miles around the world.

Back in 1884 to 1886, an American named Thomas Stevens pedaled his “High Wheeler” Penny Farthing around the world. He traveled on rocky, sandy, muddy and horrifically nasty roads with one of those newfangled bikes with the big wheel and the tiny following wheel. He didn’t enjoy panniers for gear and he couldn’t carry much water on that ancient bicycle, but he did it. I must say he proved himself one tough hombre. I’m a sissy and a pussycat compared to that guy.

Across the planet, seafarers watched civilizations rise and fall. Human lives match civilizations in that they spring forward in youth, mature with age and fade into antiquity. I am in my fading stage, which I will prolong for another 20 years if possible. Should be a lot of fun riding a bicycle at 90. I thank my lucky stars for a grand life and amazing good fortune.

In all living, I feel great gratitude for my luck, health and wellbeing.

Newport became a center for marine research and home to Oregon State University’s Hatfield Science Center and, since 2011, the National Oceanic and Atmospheric Administrations Marine Operations Center on the Pacific. The Oregon Coast Aquarium, which opened in 1992, features one of the top ten aquariums in the nation, with about 450,000 visitors a year.

With one glance back at the beach, I saw a dog chasing a Frisbee, a child building a sandcastle and a flock of seagulls fighting over a fish. Those activities produce the lighter side of life, if not the very meaning of life. To pursue the moment for each creature creates the highest expression of living.

While passing through Newport, apple blossoms dazzled us along with a myriad of flowers exploding along the road. Route 20 quickly meandered along Little Elk Creek. Up and down it ran, carving in a serpentine dance that led through deeper woods with giant trees blanketing the highway.

We pedaled through a 100-year old town of Toledo. Junk 57’ Chevys and 65’ Mustangs baked in the sun with paint jobs peeled over the years. But still, those old cars brought back memories of America’s auto age. “See the USA in your Chevrolet…America is the greatest land of all.” On one building, a “Luck Strike” ad showed the wonders of smoking. Today, it’s banned from bars, restaurants, buildings and everywhere because it causes cancer and kills 450,000 Americans annually. I am mystified why humans try to kill themselves off with smokes and liquor sooner rather than try to gain the most out of their lives.

As we cranked eastward, the land changed dramatically from sandy seaside with the vast ocean to deep woods. We steadily climbed to 500 feet and higher. Nothing like shifting through 21 gears to get the right one for the climb. My bike runs three chain rings on the front and seven gears on the free-wheel. We’re all riding Expedition Mountain Touring Bikes for greatest stability and load-carrying capacity.

That night, after a day of climbing, we pitched our tents by the river. Campfire, cooking stoves and vegetable stew with tortilla wraps made for a fine end to the day.

“Nice day boys,” said Wayne. “I’m looking forward to the ride tomorrow. Should be prettier with each passing mile.” 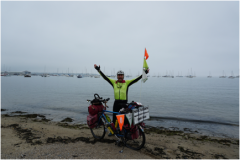 Part I: Reflections. Editor’s Note: An update on Frosty’s adventures and a nice snapshot of those special moments that make travel worthwhile. He sure does keep busy! It reminds me that I have to stop writing books adventures and get out have a new adventure! Location: North America Adventure creates unique “moments” for your heart, 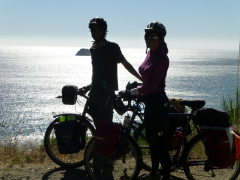 While adventure cycling, your highs become higher, your lows become lower, you sweat on the climbs and you chill on the descent. 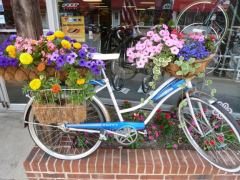 The following was contributed by Frosty Wooldridge. It is one of his “Spirit of Adventure” bicycle greeting cards.