Better known for honeymoons and lazy romantic getaways than nonstop 48-hour solo blitzes, Kauai easily proved itself easily capable of handling the latter. Booked at the last minute when an upcoming weekend freed up, I avoided looking at pictures ahead of time; I wanted all 550 square miles to be a surprise.

The crowing of roosters woke me up at sunrise Saturday, and I walked by a few dozen to get to my Jeep. As I quickly found, they are all over the island (with various competing theories on the blogosphere on how the got there). I decided to start off the weekend by heading for what I was told is one of the most picture perfect areas of the island —The Napali Coast. (Pictured above and below.) The winding one hour drive up the east coast featured stunning ocean views to the right, lush tropical scenery to the left, and passed through sleepy beach villages and over single lane bridges to its final destination — the quickly filling parking lot at Ke’e Beach.

The first part of the Kalalau Trail hike ascended along the rugged coastline, providing constant, jaw-dropping views, and passed through dense tropical greenery. After descending to Hanakapi’ai Beach, the trail makes an abrupt left turn into a lush valley. After weaving through tropical greenery along a creek, the trail eventually broke out into the open, and I could not have been more impressed at what lay in front of me: the stunning 300-foot Hanakapi’ai Falls. After resting on a rock for the obligatory photos, I headed back to Ke’e Beach for some relief from the humid heat.

After a swim, up next was the “Grand Canyon of Hawaii” — Waimea Canyon State Park. After some mango and coconut at the parking lot fruit stand, I strapped the backpack on and descended down the rust-colored, green-tinged (looking of moss) canyon to yet another waterfall. Kauai, as I would find out the next day, is covered in them. At 12 feet, this waterfall was no match for Hanakapi’ai, but still serene and picture worthy.

Day two started off with a thrilling way to see Kauai’s geography: A helicopter ride. The chopper dipped and weaved through the epic canyons along Napali Coast (chopper blades within yards of rock at certain areas), hovered over endless waterfalls, and traced the coastline. The pilot pointed to film locations from Jurassic Park and King Kong, and crossed over the now-defunct Grove sugar cane plant.

After the chopper ride, I decided to wander aimlessly for the final portion of the trip. Kauai is an island of small villages, and the road west passed through the historic village of Hanapepe. Hanapepe features a circa-1900’s swinging footbridge (restored after Hurricane Iniki) and restored 1920’s storefronts. A few villages down the road is Waimea, with a circa-1938 art deco movie theatre. The road west — and then north — got more remote, and eventually turned to dirt as the jagged edges of the Napali Coast came into view. The bumpy ride ended at the stunning Polihale Beach. This remote, pristine beach appeared completely untouched by human activity, and I was the only soul there.

Hawaii wouldn’t be complete with hitting a tiki lounge. With great appetizers, classic island mixed drinks and the perfect tiki lounge vibe — complete with island decor and tiki torches — Keoki’s Paradise in Koloa was the perfect venue to reflect on a perfect 48-hour adventure.

The roosters woke me again the next morning… and it was not easy driving to Lihue Airport to be flown back to the Bay Area rat race of traffic, chaos, and reality… 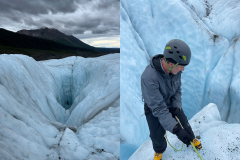 Adventurer Mark Loftin explores the glaciers of Alaska, including climbing ice walls, rappelling down and sitting before the beauty of an ever-changing, surreal ice wonderland. It turned out to be an antidote to the information overload of daily life.