Many adventures require months of planning, gathering and saving; others take no planning at all and begin in your own backyard. Our friends, Mike and Bill, invited me and my boyfriend Kirk to come over to play in their backyard one warm, sunny April weekend. It just so happens that their backyard was Six Rivers National Forest in southern Humbolt County, California. Kirk and I, always the intrepid wanderers, asked our hosts to recommend a nice bike ride around their woodsy community of hilltop cabins and sweeping vistas. Bill and Mike, smiling wide, suggested a 36-mile loop that began and ended at the base of their driveway. Neither of them had taken it before, but they’d heard it had a “few” hills and “some” pavement. Kirk and I had no reservations. We love riding our road bikes along challenging paths and taking on whatever comes our way. And, by the end of the conversation, we’d convinced Mike and Bill to join us on their mountain bikes.

We set off from the cabin at 11 a.m. Saturday morning, leaving Gus and Katie, two friendly basset hounds, behind to sniff the grass and guard the homestead. Kirk, Mike and Bill took off ahead of me, sprinting up the first fire road. I knew they’d wait for me at the top, so I took my time, breathing in the mountain air and catching the views of green rolling hills surrounded by tall redwoods. It was my very own National Geographic special. I was right where I needed to be.

The road was tricky. Small, sharp rocks littered the ground and my full attention was on taking the downhill slow, adjusting my weight on my little Bianchi, pulling the bike left and right and up and down to avoid busting a tire. I never rode my road bike on roads this complicated. I felt a little like an amateur snowboarder heading down a black diamond. I had the skills; I just had to focus all my energy to applying them, embracing my fear and surviving the descent. I caught up with the boys just as Kirk, who loves to fly and careen down hills, oblivious to any obstacle, caught a flat. We stopped to repair the tire and Mike and Bill continued. (Road bikes being faster than mountain bikes, we knew we’d catch up.). We goofed around in the sunshine as Kirk lazily repaired his ride.

Eventually, we met up with the guys again. We found them lounging oh! so contentedly under a pair of shady trees, dreaming of lunch in a town not too far away and a possible dip in a cool spring. So, we trekked on, in joyful pursuit of a sandwich, a Twix bar and refreshing mountain water. Then, as I tried to ascend a steep grade in my lowest gear, my derailer (the mechanism that switches gears) bent sideways from the pressure. I felt like an idiot because I knew I should’ve been in high gear and I had panicked when I couldn’t get the bike into the right one. Kirk stopped, inspected the damage and said, “This is about the worst thing that could’ve happened. I’m gonna go up the hill and tell the guys to wait while I fix your bike. You know, you’re going to have to ride the next 15 miles in one gear.”

I stepped away from the scene of the crime, shaking, and walked over to a calm mountain stream to collect my thoughts. The sun bore down on my face, a deer pranced across the streambed. I was in the middle of nowhere. No cars had passed us in the two hours we’d been riding. I thought, “Okay, you can do this. This is just the universe’s way of challenging the limits of your own mind and body. You can go beyond what you think is possible.”

I took a deep breath and watched for Kirk. Ready for anything. He returned with a plan. “I’ll ride with one gear. I’m stronger and more experienced. You take my derailer.” And a hero was born. He quickly exchanged his for mine, reconnected his chain and we took off to meet the guys. We had 15 more miles to go and I was hell-bent on making sure Kirk made it in style.

He was amazing. Most of the time, he beat us up the hills. He’d lounge on the grass, bike off to the side, looking out into the distant redwoods, and wait for us. I knew he was strong before this, but my heart expanded and I knew he supported me. Each time I felt like giving up, when my legs wanted to stop turning the tires, when my lungs tightened and I was on the verge of hyperventilating, I’d look up to him, half a mile ahead, on one gear, and pushed on. If he could do it, I could do it. And I did.

At one point I got a massive bloody nose – my body giving out, I’d never seen so much blood, and I was so exhausted I thought I’d never make it home. But, eight hours after we’d begun, the four of us watched the sunset from a ridge that overlooked the distant spec of the Pacific Ocean just minutes from the cabin. We knew we’d accomplished great things that day. We knew we had a story to tell for years to come. We knew we had bonded and shared the true meaning of teamwork, friendship, freedom and absolute adventure. We knew we’d had fun.

Columnist. Jen is a backyard adventurer and writer currently in transition from San Francisco to San Anselmo. She thrives on love, friends and travel. Her next scheduled trip is to Vietnam this August to work on a documentary. You can find her practicing her speed and form on her little Bianchi (named Poppy Junior) on the streets of San Francisco and random trails on Mt.Tamalpais. 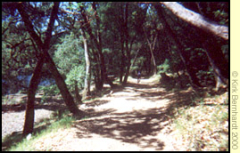 Backyard Adventures “It’s not a party till something gets broken,” Jen said with a questioning tilt in her voice and a large smile. This after she’d jumped and skirted around far too many sharp rocks for my very bald tires to handle. Kirk was visibly exasperated, sweat pouring down his forehead in rivers, heat and 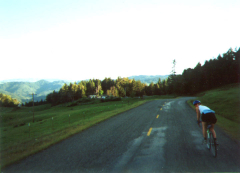 Jen sets out to explore her new “hood”, the nooks and crannies of San Anselmo.