Since my retirement three years ago, my wife Ingrid and I have bicycled twice across the United States, from coast to coast, within a year. The first was the southern tier from St. Augustine, Florida to San Diego, California; the other, the Trans-America Trail from Yorktown to Victoria BC. We were self-contained, by ourselves and carrying everything from tent to candy bars. After that, I just wanted to stay put for a while and enjoy my 68th birthday at home. When friends asked about our next trip, I answered, “just a spin around the block.”

But Ingrid had other plans when I spied maps tucked under the tablecloth of our kitchen table, and I knew she was up to something. I peeked and saw maps for the full length of the Pacific Coast. Facing Ingrid with an incredulous look on my face, I said that we had to talk. Low and behold — another trip was being born. I remembered what I promised over 20 years ago “for better or for worse,” gave up and just said, “Let’s go.”

So on August 8, we flew to Seattle, WA where some dear friends, also bicyclists we met on the Trans-America trail, picked us up at the airport for an overnight stay at their home in Bothell on the outskirts of Seattle. After a short ride to the ferry, we biked to Bellingham, WA. To fulfill a lifelong quest, we took the easy way out, boarding the ferry to Alaska through the Inner Passage all the way to Skagway, returning via Sitka to Bellingham. Our mode of accommodation was retiring to our tent affixed with duct tape to the aft deck of the 418-foot-long ferry, M/V Columbia, for six-and-a-half days. Life on board couldn’t have been more elegant.

Docking at each port along the route gave us a first-hand impression of the Alaskan way of life. After returning to Bellingham, our route took us to Victoria, BC, then to Port Angeles on the upper peninsula of WA, where we jumped on Rt. 101 S. for our southbound trek by bike. The coast was extremely picturesque, though quite exhausting. We passed magnificent offshore rock formations, called sea stacks. The shoreline was wild and rugged, with steep hills and spectacular views of the Pacific Ocean. The sunsets were the most beautiful and sea life was abundant. We saw gray whales, sea lions, seals, eagles, hawks and all kinds of birds and ducks.

The Avenue of the Giants in northern California was a wonderland of trees. Camping under the canopy of the giant redwoods made us humble and appreciative of just how awesome and breathtaking they really are. Fog, cold and dampness plagued us for most of the northern corridor. But once we got close to southern California, our chilled bodies thawed out and the rest of the coast was warm and delightful. We also had the opportunity to visit two other dear bicycle friends in San Francisco and Los Angeles.

Challenges, such as the continuous curvy “Dramamine” hills, forging tremendous bridges, sharing the road with 22-wheeled logging trucks, touring buses and cars, made our daily life in the fast lane extremely nerve-racking. We were very fortunate that we had only one flat tire, which was Ingrid’s front tire.

Finishing our trip, 1,850 miles in 48 wonderful days, at the Mexican border on October 3 left us excited and happily fulfilled. Since we still had a week before our plane left for home, we shipped our bikes home by Amtrak, rented a car and drove to Sequoia, Kings Canyon, Yosemite and Grand Canyon National Parks where we also enjoyed hiking in each park. We had enough time left to visit the sites at Canyon de Chelly National Monument and hike down to the White House ruins. On August 13, we boarded the plane for our return flight home to North Carolina where, any day now, I expect to find more of Ingrid’s maps hidden underneath the table cloth. 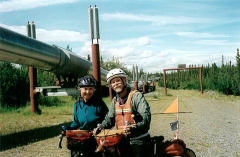 Dick and Ingrid share lessons learned and beautiful memories about their bicycle trip and share their photos with us. 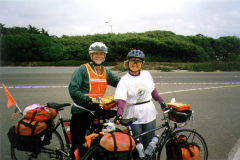 Dick and Ingrid have started a new journey and cycle down the Pacific Coast.