How to make a memorable moment

And a life well-lived.

As I write this, my website celebrates its 20th anniversary, and I’m starting my 50th lap around the sun. So, I’m feeling sentimental. I’m also wondering, like elderly people have been saying all my life, “Where the heck does the time go?” More specifically, I wonder, “What have I done with my life?” Maybe it’s the same question. Fortunately, a recent mini-adventure gave me time to reflect.

It was due to a chance encounter 22 years ago that I sat on the plane to Rapid City, South Dakota, to meet some old friends. I marveled at the Badlands far below. They looked so small now, little more than a scar on the surrounding rolling, grassy plains. In a matter of minutes, they scrolled past the window and were gone. 22 years ago, it took me days to cycle through the Badlands, and I felt as if I were swallowed whole and spit out the other side.

Trying to find the Badlands, I was lost before I even began. I had entered off a backroad from the Pine Ridge Indian Reservation, a whole other world itself. The dirt roads weren’t on my map, and a creek had washed out most. I had bought a paper state map — I have to say “paper” because, back then, it was an analog not digital world — at a local gas station. It was designed for cars traveling hundreds of miles a day, and it was only possible to deduce a mountain by the winding roads. I knew that the Badlands were north of me. I checked my shadow and then double-checked my compass. Okay, so north was thataway, I pointed, orienting myself. It didn’t help much because the road I traveled went west. I took the next northerly dirt road, but soon it swung in the wrong direction around a hill. I continued forward, always turning north if I could. It was tempting just to walk and cut a straight line. At this rate, it took hours to meander my way through the hills to the official park entrance. The whole time the scorching sun wringing the water out of me.

It was one of those moments that only a true adventurer knows — when you go from being in nature to being part of nature. The dust coats your clothes and makes your hair hang low. The sun penetrates your skin an inch deep. You’re grazing off the food of the land and — if you’re lucky — you’re replacing your body’s water with the local water. (In a few days, 60% of your body will be composed of the local water and few more percent composed of food — you’ll be mostly a different person.) You can’t simply remove yourself, you must follow the rules of the land to survive, navigating the wrinkles and folds. It’s an awesome feeling in the true sense of the word, meaning that you’re frightful that you might not make it. Well, needless to say, I survived, but it was yet another day I vowed to carry more water.

Now, I wonder why I was in such a hurry to get from one end of the Badlands to the other. It seems a shame that those few days have been compressed into a sprinkle of memories — I wish I had more memories.

Long ago, I gave up measuring my life by materials things and started measuring my life by experiences. It was an easy shift to make when I imagined lying on my death bed and wondering what would truly matter. (Some people imagine what epitaph they want to be written on their tombstone. This is a game we couldn’t put in our new book that teaches kids how to dream.) For me, the only thing that seemed to matter was my memories. So, I began to think of myself as an experience collector. And to do that, I needed to go on as many adventures as possible — and the bigger, the better! Barring a tragic accident, this seemed like a guaranteed formula for success.

Lately, in my day-to-day trudge, my desire to make memories took a back seat to trying to be successful — whatever that means. I sighed. I’m told I sigh too much. Then I had an obvious realization. As soon as this plane lands, I will get my wish to go back in time and have one more day on the road and make more memories.

When I had crossed the Badlands, I was blazing my own trail across the country. I rarely ever met another cyclist. So I was delighted to meet Kurt, Dennis and Vilmar in the Grand Tetons. Kurt was a bit slow to warm up. He still loves to tell the story of meeting this crazy cyclist with a dozen bottles of water. He still thinks I’m crazy, nonetheless, 22 years later, Kurt has arranged a reunion for us all. I had mistakenly thought of this as just a sentimental rehash of old times, but it was a chance to make new memories. Vilmar had moved to Rapid City recently and, coincidentally, it was on the trail of my bicycle journey not far from where we met.

I’m greeted by a bunch of back-slapping hugs. After we toast our reunion, I declared that I wanted to leave the weekend with more memories. “How do we create more memorable moments that we’ll never forget?” I asked.

Vilmar, who was a logistics planner in the air force, said, “No, no. You can’t plan for stuff like that.”

Dennis, in his succinct manner, said, “They just happen.”

And Kurt, “You just need to put yourself in the right place.”

I didn’t find any of those answers very satisfying. I was hoping for a hearty, “Yes, let’s do it,” and a clank of the beer mugs. Despite the lack of enthusiasm, we must have ended up in the right place because soon the mini-adventures unfolded. I want to write about them all so I never forget, but this story isn’t meant to be a laundry list of our exploits. However, I will share one memorable moment about traveling the road to Mount Rushmore.

Our day began much like it did decades ago except this time instead of four bikes, we were in two trucks. Early in the day, just as we left town, Kurt texted us to say he needed air in his tires. Vilmar, always being well-prepared, had an air compressor in his truck, so we pulled aside to wait, and just as we were about to give up, Kurt drives by as if we aren’t even there. Then we leaped frogged each other a few times each thinking the other was in the lead, including long stops wondering where the other had gone. Finally, we reunited and had double the stories for the day. It was very frustrating but very hilarious! Just like old times. It gave meaning to the cliché, “The more things change, the more they stay the same.”

Yet, some things do change. It was a perfect day visiting Mount Rushmore, with the smell of the pine trees reminding me that I wasn’t just looking at photographs or reminiscing in my mind’s eye. The four presidents looked no worse for wear. Yet, we had all changed. No longer young men but of a presidential age. Grayer and wiser. Peers to the men frozen in stone. It was tempting to feel like a victim of time’s relentless march, but I noticed my eyes saw the beauty of the monument like never before. I even thought to myself, “How could I have stood here decades ago, on a day just like today, and not have noticed how beautiful this was?” I also never took the time to learn the history. This time I did and the feat of art, engineering and politicking (someone had to get permission and money) was like an exclamation point on the beauty of the sculpture.

After our reunion, I asked everyone to contribute any words of wisdom they had. “For me,” I said, “besides the importance of good friends, our reunion had a lot to do with reminding myself to enjoy the moment because our memories are all we really have left from so long ago.”

Kurt’s comment quickly threw us off track, “Quick thoughts of the weekend that come to mind: 1) Wear protective headgear when in Rapid City on the Fourth of July. 2) Always flush the toilet…”

Dennis replied, “I forgot about the toilet! Doing better with that these days, Scott?”

And I said, “You know me, just creating memorable moments wherever I go.” (Oops!) This is a good example of an unplanned memorable moment — it will be memorable because they won’t let me forget.

So, I got my wish. It’s an ironic wish because the sprinkle of new memories quickly seeps into the ground of my mind and disappears. I’m left wanting more. I suppose you could just say I miss my friends. I think I was wrong when I said our memories are all that we really have left. Sure, the memories are priceless, but they are ephemeral, finicky and often best forgotten. It is the people that you meet that become lifelong friends that are perhaps the best reward of an adventure. They don’t get left behind. They travel with you, adding a complementary perspective on your shared experiences. It’s like making a memory times two. It may actually be exponential. The more friends you have, the more perspective you have on your own life. And, you get to sit around the campfire and listen to the stories of your friends’ lives. Stories — they are like free memories.

In retrospect, I have more than memories. I’m left with a feeling of enduring friendships that grow but don’t turn gray, full of moments that are more like monuments, like Mount Rushmore, that can be revisited again and again, each time seeming a little different, each time learning a little bit more. The emails and photographs from our time together keep arriving, shedding a new perspective on our adventures. It’s like replaying a movie but as a different character. And I see that character growing and becoming better able to seize the day — or, should I say? — seize the memorable moments.

22 years ago, we were four very different people with nothing but a bicycle as a bond between, but it has been enough to overcome our differences and the passage of time. Maybe you can’t plan to make memorable moments, because you can’t plan for meeting friends like this. All you can do is put yourself in the right place, and they’ll happen.

Here’s to the next 22 years of growing not graying. 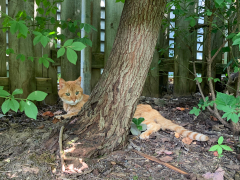 Time for an update on my progress of losing weight while literally doing nothing. A sad update leads to renewed motivation. I also added a few new rules to try, like: Put down the spoon in between bites. 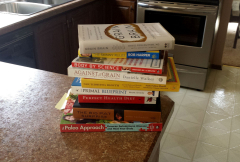 My first life experiment will be about a topic that seems commonplace: how to lose weight. Here I try a variation of a mindfulness diet. I call it the Do-Nothing Diet. Can I lose weight by literally doing nothing?