Scott funded most of his adventures, this website and a lot of school projects with the profits from years of working in the advertising business. Scott worked as either a senior graphic designer or art director in some of the best advertising agencies in the country, including TBWA\Chiat\Day when they won the prestigious Ad Agency of the Year Award. Not only did he design dozens of bicycle logos, but he also designed thousands and thousands of ads, posters, billboards, websites and much more.

Scott’s loves to do graphic design for anything related to bicycles, travel and adventure, especially logos. Who better to design your logo than someone who loves bicycles? Please browse this small sample, and if you like what you see and want to hire Scott, we guarantee your satisfaction. Besides, all profits help fund more adventures, web maintenance and school donations. So, hurry. Call now. Supplies are limited. (Just kidding.)

Below is a small sample of Scott’s bicycle logos as well as related adventure, fitness and travel logos. My graphic design website is no longer because it is hopelessly out of date, and I get most of my clients by referral; however, you can still see some of my best work here: this award-winning website, my new website for kids, and all my books.

Don’t miss the bicycle ad that got me fired below.

I tried to adapt my bicycle theme to a website about graphic design business. For years, I kept them separate. Then I tried merging them together, similar to how you see it now. But, I admit, neither way was very successful. I probably should have just branded my design business with my name, like scottstoll.com.

In the header of this webpage are two more related logos: the main logo The Argonauts a travel-adventure website that was built around my trip around the world, but was expanded to include everyone’s journey. There exist about a dozen variations of this logo different purposes. And next to that is a logo that represents bicycle touring and bicycling around the world. I turned this logo upside down, because when traveling the world I realized everything was relative.

And you can see the Falling Uphill logo and book design. Falling Uphill became the metaphor for my trip around the world on a bicycle seeking happiness. You probably know that by know, but did you also know that I was the graphic designer, illustrator and production artist? Oh and the author, too. Yikes. But I had a lot of help!

SUCCESS STORY: My client requested, Wheel Peddler Logo, “I want a logo that people can see from across a parking lot, and say, ‘Oh, there’s Jim.'” So, I designed a “simple” looking logo that can be placed on all kinds of media and is attractive and legible from business card to billboard size, especially on the side of his mobile bicycle store and repair shop. It’s also designed so that the colors of the different elements can be changed easily to attract more attention depending on where the logo is printed.

SUCCESS STORY: We spun the creative wheels for several rounds and returned to the client’s original idea, which gave them the confidence that it really was a good idea.

SUCCESS STORY: My client, Pedal Chick, gave me a lot of creative freedom, and some great ideas, and this synergy generated a storm of creativity. These concepts will make great logos, T-shirts, ads and posters, which will create great marketing and brand awareness.

SUCCESS STORY: Bicycling is near and dear to my heart, and I think it shows in my artwork. My client knew what he wanted but gave me a lot of creative freedom, which resulted in a logo that resembles a Chinese character and would make a great tattoo.

The success of the original Big Dude Cycling logo spawned one of the most bizarre illustrations I’ve ever done. Click on the Chain Dude logo. This one deserves to be seen full size. A successful logo can survive many variations.

SUCCESS STORY: A simple but very effective logo, that’s not to say we didn’t go through several dozen variations to get to this solution. We both liked how the athlete is leaping off the platform of performance. These kinds of visual cues make a logo interesting, meaningful and memorable.

Update: This client went on to train the Club de Fútbol América, a Mexican football league, to the championship.

A closely related passion to biking is hiking. I designed a series of hiking T-shirts. Here is one of my favorites. I designed way back in 2005, back when the first iMac computer was becoming popular and LONG before an iPhone. Many ideas in advertising and entertainment are spoofs, meaning they re-imagine or re-popularize or piggyback an idea or fad that is already in the mainstream consciousness. Since the shirt has been designed, I believe it was plagiarized (one of the shirts was, I wasn’t told which one) and my client sued. It seems they lost because now this shirt is quite popular and I’ve even seen it on bumper stickers. Oh, if only I had a nickel every time someone…

Here is an ad that I feel very strongly about as you can tell from my body copy below and the headline which has a double entendre. This ran in the San Francisco Guardian. It’s uses a photograph of downtown SF from my old apartment and I increased the contrast of the fog to make it look like pollution. And if you look closely, you can see the old-fashioned halftone screen of the newspaper.

Body copy: FREE the environment! The San Francisco Bicycle Coalition’s goal is to empower bicyclists to make a difference in our community: to make the city bicycle-friendly and the air easier to breathe, add more bike lanes and improve transit access, reduce car speeds, combat global warming and cement-rification, save the redwoods, end racism, feed the hungry, and promote peace, love and happiness. So you decide: do you want to make a difference or do you want to just sit there? Join now, create positive karma for all your bicycling reincarnations. (Oh yeah, members get a 10% discount on supplies at area stores.) 415-431-BIKE or visit sfbike.org

I also did a series of web banner ads. It’s a little generic, but those were the days of dial-up phone modems. This illustration is of the SFBC’s famous Critical Mass Ride.

The bicycle ad that got me fired.

The reason I quit the corporate world.

You would think it was he above ad for the San Francisco Bicycle Coalition that got me fired, but no.

To make a long story short: Below is a restored photo from the only existing printed piece of a full-color, full-page newspaper ad that is now yellowed, wrinkled and spotted. This advertisement actually won an award in the regional Addy contest and then went on to the Nationals. However, before that happened my boss used this as one of his primary reasons for firing me. He said that he had never seen a focus group tear apart an ad so much. In fact, he said that he had never seen an art director as bad as me. This happened on the Friday before New Year’s Eve, and he told me not to come back next year, meaning Monday. This event led to the incendiary moment which compelled me to ask, “If I could do anything, what would I do?” And if you know me, you know my answer was to ride a bicycle around the world and find the meaning of life and happiness or die trying. Well, I came close to dying several times, but I lived to write my best-selling, independent book Falling Uphill about my quest for happiness. And, you can relive this moment in the opening chapter, or read the short story made long.

More articles in this series:

The following blurb is the call to action. Every ad has one.

Scott is still available for graphic design, information design, web design, branding and illustration. Profits support this website and our work with schools, not to mention Scott himself. Please contact Scott to discuss your project. 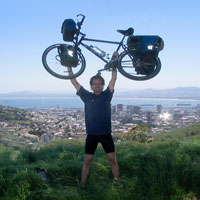 My claim to fame is that I rode a bicycle around the world and wrote some books. More about me.
More blogs.
If you enjoyed this story, please make a small donation to help us with our cost and keep Scott caffeinated. Or go a little bigger, to fund a School Visit, the Make-A-Book Project or Book Donations. Thanks to everyone that has helped us make dreams come true for the past 20 years!
Donate

This is a test. This product is available for purchase at our on-demand printer.

Aboard the Perseverance is my name, “Scott Stoll,” engraved on a silicon chip. Does that make me an astronaut? Are dreams written in stone — or silicon? 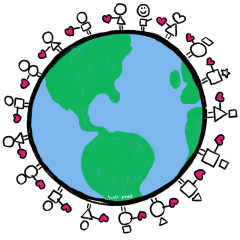 Buy a book for a child in need

One of our children’s books will be donated on your behalf, along with paper, pencil and eraser, so the kids can draw their own dream.

At our last Make-A-Book Project we donated 559 books and it still wasn’t enough! We needed even more for the teachers and volunteers! We’ve also donated books to kids in Australia, Argentina, Paraguay, Kenya, thousands of kids here at home. We have even inspired untold adults.  If you are like us, you will love feeling like you are part of the new adventures.

If you donate ten or more books, enough for an entire classroom, we will try to team up with a classroom and do a story. You can recommend a school here or abroad, or we will look for one. If you donate fewer than 10 books, they will be donated to a local school or non-profit organization here in Cincinnati. Please note: Scott will pay for the shipping of the books to their final destination.

Dear God, O.k. I kept my half of the deal. Where’s the bike?

Join now and get 10% off your first order.