I’ve done many things, but I don’t think I hold any world records until now. Thanks to my sponsors at Texas Flange. I am the first person to ever cross state lines by riding a bicycle over a river! It was a very exciting mini-adventure. It only took a few minutes to do but took weeks of planning and preparation.

My first test ride was a local pond, and the second test was on the Little Miami River. I don’t have any pictures of the second test because I thought I might capsize and lose my camera or phone. Per usual, many people filled me with horror stories about everything that could go wrong, especially the dangerous undercurrents of the Ohio River. Even on my test ride, a woman informed that a child had drowned on the Little Miami weeks before, and that she used to work one of the gambling riverboats on the Ohio River, and that she, herself, discovered two victims of the Ohio River snagged on the anchor lines of the riverboat.

My test rides seemed to be successful, so I made several trips to the Ohio River to scout a location, weather, currents, river height, flow and traffic. It was easy to see that my biggest challenge would be avoiding the Kentucky coal barges. They are as big as a train and move surprisingly fast. Below you can see a coal barge passing below the L and N Pedestrian Bridge. This one is five long, plus the engine tugboat. They are equipped with radar to avoid obstacles, but, of course, they can’t stop. Climbing the bridge I used binoculars to scout my path. I estimated that I had about 15 minutes between seeing a barge and being run over by a barge. I also calculated that my shuttle bike’s cruising speed was 6 kilometers per hour and that the river flow in the autumn was about 1.6 km/h. And the wind speed that day was about 25 km/h going with the current. So, it seemed that if my pontoons acted more like sails than floats, I may end up going backwards.

My patience ran low as I waited weeks for the weather to cooperate. At times the winds were gusting very high or in the wrong direction, and then it rained for weeks and the river flow nearly tripled. Finally, the weather seemed ideal. You can see below how I plotted my course. My plan was to go against the current upstream to test the stability of the Shuttle Bike, then I would slingshot myself down the river, gaining speed and crossing the gap as fast as possible. The pedestrian bridge narrowed my danger zone to about 100 meters because the barges had to pass through the largest section, near the white dotted line.

Of course, a crowd of spectators grew as they watched me assemble my bike-boat, and the mothers admonished their children for getting to close to the river. They reminded me that people have been swept away simply by wading into the river. I donned my backpack filled with empty two-liter bottles that would serve as my lifesaver. I thought this seemed like a good idea, even though lifesavers aren’t required for non-motorized vehicles. Then I waded into the river carrying my bike-boat over the slimy rocks. The first few moments were the scariest. I boarded my bike-boat and immediately began floating downstream spinning slowly in a circle. I had installed my pontoons backwards and the keel fins didn’t work going backwards. Luckily, the current pushed my back ashore.

On my second try, everything was going as planned. The wind was nil, the boat was trim and riding high. I felt strong. I crossed the last pylon and entered the danger zone, about halfway across, I noticed a barge round the bend in the river. Okay, that meant I had 15 minutes of safety left. Like riding a bicycle around the world, once you reach the halfway point, there is no reason to go back. About this time, I realized that I had forgotten to bring my wallet. I wondered what the headline would be if something did go wrong: “Nameless man drowns while attempting to ride a bicycle on the Ohio River”? I panicked a little and the roller on my rear wheel, the part that drives the propeller, began to slip, and the propeller itself was churning the water into foam, losing traction. My biggest threat now was shaking a bolt loose and being cast adrift. I put this thought out of my mind, took some deep breaths and forced myself to slow down. There is something strange about my psyche, I respond very well to immediate threats; ironically, however, it is the imaginary threats that literally make me ill with stress.

Once I found my stride again, it only took me 3 more minutes to reach the safety of the next pylon. Now I could relax and enjoy floating down the river to my destination. For me achieving a big goal is like a hot tub, the first few minutes are agonizing until the tingles subside and a peaceful, calm washes away all my worries, and life is beautiful again. 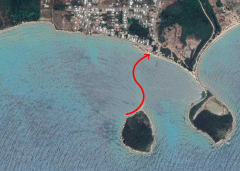 Fear of water versus fear of self

Scott swims from one island to another overcoming his fear of water and fulfilling an old dream.

The bicycle is the noblest invention of mankind.