I had the honor to speak to the inmates of Wisconsin’s medium-security prison, Fox Lake Correctional Institute. It was one of my more challenging presentations. I asked the chaplain who was organizing the event, “To be frank, why would the prisoners, who can’t go anywhere, want to hear about traveling the world on a bicycle? That sounds like a recipe for disaster.”

She said, “That is exactly what they need to hear? They need the hope! They need someone like you to show them what is possible.”

And so I spent quite a bit of extra time preparing a presentation that would: “create an atmosphere or climate which restores the dignity of the individual and provides optimum opportunity for positive behavioral changes.” More specifically, I hoped to inspire them with the inner passion to transform themselves right then and there. I may have needed my trip around the world to transform myself and learn that I held the key to my own happiness, but travel isn’t required to learn these lessons.

Despite my worries, my audience was more polite and attentive than the norm. (I’ve run the gamut of ages from kids so young they can’t sit still because they have to go the bathroom all the way to elderly care centers where they have the same problem.) At one point, though, the inmates were literally rolling in their seats with laughter when I told them about my experience drinking coca tea in Bolivia, which I said, “Is made from the same plant as cocaine.” As they roared with laughter, I tried to clarify, which didn’t help, “No, it’s more like drinking a cup of coffee. It’s not like doing cocaine. Not that I would know… Not that I’m judging anyone here if that’s what they choose to do….”

Like all great teaching experiences, I felt as if the students taught me even more. In particular, one man asked me what it was like to return home. He said that he had been incarcerated for 8 years until he had to go to Madison for a medical procedure. He said the lights and billboards and everyone buzzing around in their cars and on their cellphones frightened him. That’s when I realized that when these men are released, they are going to experience the same culture shock that I experienced when I returned home after 4 years. Coming home was like looking into a mirror and realizing that I was a different person and that my reality was an invention of my own mind. A scary experience! I also sympathized with how lonely and isolated from society these men were. I know these two elements were my hardest obstacles. Reform—or should I say?—transformation is the most difficult journey anyone can take.

I was grateful for the chaplain’s dedication to helping the inmates. She had to go to a lot of extra steps to organize the event, especially since during my first visit, the prison was locked down due to fog, and the show was canceled. But she truly values making a difference in their lives, and I think she did since the inmates were lined up to shake my hand at the end (hugging was not allowed according to my list of rules), and tell me how much they loved the show and thanked me for volunteering my time. And there is a long waiting list for the book I donated to the prison library.

One more funny side note: Instead of emailing an update to my family, I accidentally emailed my dear friends Dick and Ingrid, who inspired me when I met them a long time ago when they had just retired and were cycling across the USA to celebrate, and told them: “I have to go to prison today.” They, of course, emailed me back right away to say they were sorry to hear that and asked if they could help in any way.

I wasn’t allowed to bring a camera, so to give you a flavor of the experience, here is a great video of Johnny Cash singing a song just for the San Quentin inmates. 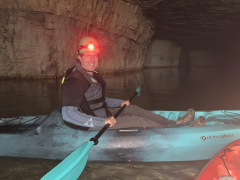