Although some consider it more “Motel 6” than “ClubMed,” the Mir space station is being resurrected and transformed into the first tourist destination in space. “ClubMir” is now commercially available to international users who seek access to the world’s most unique industrial, scientific, and recreational facility.

About the Mir Space Station

The first element of Mir (Russian for “peace” and “the universe”) was launched on February 20, 1986. In its 14-year history, it has been home to over 100 spacefarers from Russia, the U.S., Canada, France, Germany, Japan, Austria, the United Kingdom, Syria, Bulgaria, Slovakia and Kazakhstan. Over 20,000 experiments have been performed aboard Mir. It has been a unique laboratory for research in areas like the effects of long-term weightlessness on the human body, ways to make superior life-saving drugs and new alloys and other materials that can’t be made within the Earth’s gravity.

Mir is an unparalleled orbital facility. The multi-purpose platform offers more than 400 cubic meters of interior work–or play–area in a pressurized environment. The Mir space station survived the collapse of the former Soviet Union and continued productive operations for many years. However, Mir can no longer depend on the Russian government for funding, and must seek financing elsewhere. There is also increasing pressure from NASA to “retire” Mir in favor of the new International Space Station, which began construction in December 1998.

Meanwhile, back in 1997, the Space Frontier Foundation launched the Keep Mir Alive campaign, declaring that this would be an incredible waste, that the Mir Space Station should be saved, even if only for its historical significance.

It seemed like a long shot to everyone. What could a small group of ordinary citizens possibly do to save a battered Russian space station?

Yet even as Mir was being abandoned, negotiations were in progress to find a solution. In January, Walt Anderson, a wealthy U.S. venture capitalist–on the Space Frontier Foundation’s Board of Advisors–announced his intention to convert Mir into a tourist destination. And he backed it up with $20 million.

Raising $40-million, Anderson and other investors formed MirCorp to manage Mir on a purely commercial basis. A whole new era of space exploration began on February 17, 2000, with MirCorp’s authorization to lease Mir to users and individuals worldwide. Space tourism can now become an on-going reality for the first time!

MirCorp is enabling life in space to be accessible to the private sector, opening a new realm of possibilities at the dawn of commercial space travel. With an open market free to determine the use of an operational space station, the opportunities are almost unlimited. I wouldn’t be too surprised to see a Starbucks stand among the first tenants… It will be an interesting experiment, getting a good foam in weightlessness!

This unprecedented venture enables MirCorp to make the Mir space station available for operations ranging from space tourism and in-orbit advertising to industrial production and scientific experimentation. A Russian film company is even hoping to rent Mir as a movie set. You know Hollywood won’t leave that alone.

“Space commercialization is a nascent market, but MirCorp has the advantage of being first to market,” states Andrew Eddy, MirCorp’s Senior Vice President of Business Development. “MirCorp has a clear vision for broadly-based, balanced commercial development, including traditional industrial science and technology applications, education and entertainment, sponsorship and advertising, space-based Internet portal, and citizen-explorers.”

Earlier in February, MirCorp funded a mission to boost the orbiting facility to a higher orbit, and to prepare for a crew to return as soon as this month. After some repairs and renovations, Mir will be open for business.

To learn more about MirCorp and show your support, see their website at Mirstation.com.

MirCorp can also be reached via email at info@mirstation.com, or by contacting them at:

The journey of the 15-year-old Russian space station ended March 23, 2001, when Mir re-entered the Earth’s atmosphere and fell into the South Pacific. 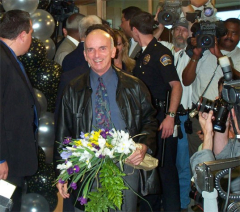 Our columnist Brook Mantia welcomes a a true space pioneer, Dennis Tito, back to Earth. 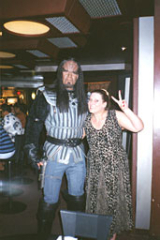 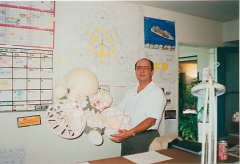