Mars One Failure to Launch

The good news is that I won’t have to eat worms and algae for the rest of my life; the bad news is that I failed to qualify for the next round of Mars One. So after almost two years, my aspirations to be the first person to bicycle around two planets has come to an end. I made it into the top 500 applicants out of 202,586. Maybe I was even number 101, but that doesn’t matter because only 100 get to move to the next round, and there were too many Americans from the start.

If you have about one minute, you can listen to my interview on WVXU, the local NPR station. I’m not sure why I’m reposting this. I was already feeling ashamed, and then to wake up the next day and see in the news about myself titled: “Cincinnatian loses out.”

My job interview to be an astronaut with Dr. Norbert Kraft (formerly of NASA, and now in charge of the applicant process for Mars One) was so bad — the worst I’ve ever done — that I literally had an out-of-body experience watching myself ruin the biggest opportunity I’ve had in years. Nothing I planned to say actually came out of my mouth. (I had to memorize a small book of information, most of which I thought would become obsolete by the time the mission actually happened, which I should have just said instead of forgetting half my answers.) And the lag and audio delay really made it impossible for me to connect on a personal level with Dr. Kraft. (I tried pretending I was actually on Mars and had to wait the 4 minutes for a response.) And somehow, of all the days in the year, I had a book due at the publishers just hours before my interview. I was exhausted from working every day for a month and somehow had just lost my mojo.

To give myself some credit, I was growing reluctant because I think I know too much about how hard this journey to Mars would be, because — not to pat myself on the back — cycling around the world is really hard. Visiting Mars is a fanciful idea, but the closer it comes to being a reality the scarier it is. (It was becoming so real, I began a list of things to bring, like: bicycle, bourbon still, 3D printer.) I mean how many other applicants know what it is like to go days without food, malnourished and fatigued; or sleep in such cold terrain that you wake the next morning with frozen water bottles and dying of dehydration; or to be isolated for days or even months; or to lay injured alongside the road with no one to help; or be sick with some strange disease in a village with no doctors? The more I learned about the trip to Mars, like spending 6-8 months in a capsule insulated from the radiation by your own bags of urine and feces, the more it seemed like a feat of survival than one of adventure and discovery.

Furthermore, I was growing reluctant to continue investing my time, money and energy into this project. The largest portion of the Mars One business plan is to use social media to earn the advertising revenue to fund the trip. I was beginning to feel like a media puppet. That’s a whole other story, involving media embargoes, nondisclosure agreements, and a lot of unhappy journalists and wasted time and opportunities. And it seemed the Mars One media blitz scheduled to launch on Monday also failed, since it didn’t break into the U.S. national media. That makes me sound a little jaded, but I was seriously considering the job and felt Mars One had some things to prove to me as well.

Nonetheless, I still wanted this opportunity very very badly. To have landed on Mars and be an astrobiologist — that would have been a dream come true. I’m sure I could have found some evidence of life somewhere. And despite some of my concerns, which I think are normal, I really tried.

Time to find a new dream

Not making the next round was a painful experience. I felt as if I somehow betrayed myself. It really makes me question my ability to move through the world impeccably. Somehow I created these rules that I live by, like being an extraordinary adventurer; yet, I didn’t create a game that I can win. And I have made agreements and commitments with the world around me, a world that doesn’t seem to live up to my expectations and wishful thinking. One thing is clear, somehow I got lost in this equation because I didn’t value myself as much as I valued my commitment to these illusions, and I wasn’t even enjoying the journey.

Somehow I must put my life back in balance and create a new dream. As one journalist, John S. said to me: “I know you would have loved the experience and the adventure but, as your life up to now has shown, you don’t have any problem finding adventure right here on Earth.”

But what should I do? What world-record, Earth-shattering dream can I do now? Or maybe I should just have fun? It’s my life, and no matter what at the end of the sol (Martian day), the only way I can measure my life is by my own experience, memories and emotions — that is my only take away. So, can I value exploring the mysteries of what it means to be human as much as I value a journey to Mars?

Visit Mars from your Backyard

You can visit Mars right from your own home or backyard in more ways than one. Yes! Seriously. 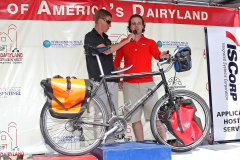