Fear of water versus fear of self

Ever since I failed a test in the Boy Scouts, I’ve had the dream to swim across things. The test was the Mile Swim Award. During summer camp on Bear Lake, Wisconsin. I think this is where it was. Some decades later, my memory is foggy about some details, but one detail remains crystal clear — my disappointment in myself and a perpetual fear of water. The worst part was not that I failed to swim a mile — I failed to try.

The challenge was to swim one mile unassisted without stopping. It took four people. One person onshore to watch. One to row. One to hold a safety pole with a red flag attached to the top. And one to swim. If the swimmer were in trouble, the pole would be lowered so he could grab on. If he couldn’t reach the pole, we also had a life preserver to throw overboard. And, in the worst-case scenario, we were all good swimmers with Safety Merit Badges, so one of us could jump overboard and rescue the drowning swimmer. No problem, right?

We took turns. First, I rowed. Second, I held the pole. “If you drop that pole even by accident, the swimmer will fail to win his award,” I was warned by our scout leader, who remained onshore. And finally, it was my turn. I looked out at the dark green waters and wondered if I might hit a submerged log or run into some old fishing tackle or worse. Of course, I had just seen two other people do it, but that didn’t alleviate my fear of water. But mostly, I was scared of the potential embarrassment. If I couldn’t make it and the safety pole with a red flag atop was to dip down for me to grab onto, everyone on the shore would have seen.

I stepped a few feet into the lake, just out of reach of the seaweed before I chickened out. “Chickened out” were the words we used back then. Of course, I failed just the same, standing there onshore with everyone watching. But, to be fair, none of the other scouts even picked on me, which made me realize my fears were all in my own mind, like my dream of drowning.

I am not sure why I am afraid of water. I have a vivid memory of falling into a pool of water. I sank to the bottom, not able to move, looking up at people rippling in the waves. It became hard to breathe and fear set in. Then someone jumped in to save me. I thought it was my grandfather. But, here’s the weird part — I asked my mother about this, and she said it never happened. So I’m not sure if it was a dream or if it was a small memory — perhaps, I slipped underwater during bath time — that grew into a monster. Whether it is real or not, it is a phobia that logic has little power over.

Another formative moment happened when I was young, less than 5, I went camping with my grandparents. They encouraged me to go wading in the river, but I was too scared. So, my grandma made me a tiny pool by digging out a shallow spot in the sandy riverbank and lining it with stones. When I got in she removed one stone and the river pour in. I remember still feeling scared but knowing I was safe. (Is there a word for this?) This memory has helped me counteract the first. They wage war against each other in my subconscious.

Flash forward to my future and every lake or river or island that I see, I want to swim to the other side. It’s weird how an experience can rewire the way you see the world. I mean, I no longer see just an island, I see a challenge. I often wonder what other people see when they look at an island.

So, on a recent trip to Vieques, Puerto Rico, when I saw a small island offshore, I immediately thought, “I bet I can swim to that island!”

This thought festered in me for four days as I watched the tides, the winds and imagined the currents and what might lurk below the waters. Later, a friend would show me an online shark tracker, and I would learn that nearby was a 3-meter tiger shark. By nearby, I mean on the other side of the island, which, in my opinion, was too close!

With only a few hours left on the island, my girlfriend and I rent a kayak and go see the island and try snorkeling. I’m still scared of water. I alleviate my fears by saying to myself, “They wouldn’t give me a snorkel if it weren’t safe to go in the water.” And, this is what I tell myself the whole time.

After snorkeling among the coral reefs near the tiny island of Cayo Real and gaining a little confidence among the seemingly harmless fish, it is time to go. We had been watching the waters, but the wind had increased. The waves are a little choppy. I think we are in between tides, but there’s no telling if there is a strong ocean current streaming between the islands. “Will you be okay in the kayak if I swim for shore?” I ask Sara.

“I’m not sure. It looks too windy. I think we might need two people in the kayak to weigh it down.”

We go back and forth, trying to decide if it is safe. “If I don’t go now, who knows when I will have the opportunity to go again?” The disappointment is growing painful, so I confess, “Ever since the Boy Scouts, I’ve been haunted by failing the swim.” And the story starts to pour out of me.

“I didn’t know this was such a big dream for you. Let me try the kayak and see if I can handle it.”

“Let me test the waters.” She gets in the kayak alone and paddles out a few meters, “I’m fine. I can do this,” she says bravely.

“Okay. Now or never. If you get caught in the wind, just go with it until you reach shore,” I say. “Worst case, you’ll end up on Puerto Rico.” I plop into the water and think that was probably not very comforting advice.

After clearing through some seaweed, which reminds me of the patch of seaweed along the shore of Bear Lake — I do an admirable job of ignoring the scratchy yet slimy feeling — I pop up to look for Sara. She’s already at least ten meters away and getting further. I shout but can’t hear a reply. So, I burst into a sprint, thinking she is caught in the wind.

I was on the swim team in high school, so I’m not a bad swimmer, better than most. Now that I think of it, the swim team was another attempt to alleviate my fear of water. Many of my friends from the Scouts were also on the team, so it had the added benefit of redeeming myself. In retrospect, it is easy to see that the only person I had something to prove to was myself.

But Sara is not caught in the wind. She is slowly and calmly escorting me to shore. But, not realizing that she is paddling away, I am panicked. I can’t catch her. I pop up and wave. “Are you okay?”

“Do you need help,” she shouts back. Now she thinks, I’m drowning.

“Wait a minute.” By the time I reach her kayak, I can barely breathe from the exertion. I cling to the kayak gasping for air and inhaling ocean spray that makes it even harder to breathe.

After a few minutes, I feel confident to keep going. She paddles ahead, clearing the way of boats and giving me something to aim for. It’s scary to look below the surface, but it also gives me confidence that nothing is sneaking up on me. I look down, and the ocean floor drops away. I feel as if I will fall into the blue holes. I want out of the water as soon as possible. It takes a great effort to slow down. Whether I survive or not, I tell myself I might as well enjoy my swim while it lasts. I feel as if I’ve jumped out of an airplane without a parachute and am trying to enjoy the way down.

I concentrate on my breathing. It’s hard to get enough air through the snorkel. In four. Hold four. Out four. It has a calming effect.

The bottom of the sailboats makes the world look upside down. I swim through a school of a hundred fish. Each one big enough to feed a family. It’s as if I’m flying through a sky filled with birds. It’s exhilarating feeling like one of them. Further ahead, I see debris from a shipwreck, abandoned anchors and the ropes of buoys; below me, more colorful fish, coral and seaweed. I sprint forward and watch my shadow trace the contours of the ocean floor. The water is clear as air. I am flying.

It is a long swim, and I am happy to beach myself onshore like a walrus, heaving with exhaustion and feeling proud. “I did it! I’m free!” It is one less memory to haunt me. It is one less fear of self.

An oldtimer, looking crispy from the island sun, remarks, “Good day for a swim.”

PS. I wrote this story in the style of Falling Uphill. It was fun! I love exploring myself via the world.

PPS. I was surprised when a friend, who was also a Scout, wrote. He said that he remembered Bear Lake and the mile swim very well. He also shared his fear. “My fear was leaving the house, and my folks thought they would get a call to pick me up a day into the trip. Even though I was balling my eyes out before I left, and when they dropped me off, I, fortunately, made it and had a great week.” I share this because it shows how we all have our point of view of the world and our own fears to overcome. Thanks. It really warmed my heart.

I’ve done many things, but I don’t hold any world records until now. I am the first person to ever cross state lines by riding a bicycle over a river! 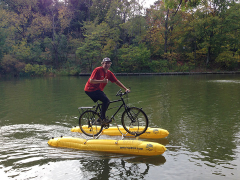 If you didn’t know, I rode a bicycle around the world, and the most popular question was: “How did you ride a bike across the ocean?” My favorite joke was to say: “I just put extra air in the tires.” Now the joke has come true.

It never gets easier, you just go faster.