(FYI: I’ve researched this a lot and when most books say they are best-sellers, it means they gamed the system. One way to do this is to flood the market, get your friends to buy the book, and then take a snapshot of the one day your book is on the best-seller list. Not so for Falling Uphill. It stood up for over a year. And, there is a similar story when it comes to winning awards. There are many awards that are basically given away to the highest bidder. Truly genuine, non-profit awards are rare.)

The Anniversary Edition is finally here!

New Print, E-book and Audio Book. The best-selling travel memoir returns. I’ve traveled the world by bicycle to discover the “secrets” of life, and I’ve spent many more years digesting what I learned, exemplifying the lessons learned, and creating a book that I guarantee is entertaining, which I hope you find enlightening. Thanks in advance to my readers for being part of the journey.

Over one year in Amazon’s Top 100 Travel Memoirs. Now a rare best-selling, award-winning independent book. Scott’s story has been seen by millions of people across the globe as featured in dozens of high-profile, international news sources, including The New York Times.

For me, the author, Falling Uphill is essentially a metaphor for the inner journey, but I’ve learned that everyone interpets the book — relives the journey — a little differently. Here’s what some other people are saying:

Scott Stoll lives a life the rest of us only dream of. With a keen eye and an open heart, he expresses the joys and aggravations of traveling the world on two wheels. ~ Michael Berry, Bay Area book critic

Scott Stoll’s cycling journey around the world raises countless questions about life in our time and answers quite a few of them. He is at once charming, innocent, fearless, and wise in his search for the world and himself. What does he find? Joy, tranquility, no end of personal challenges, and a whole lot more. ~ Larry Habegger, Executive Editor, Travelers’ Tales Books

Best Cycle Touring Account On The Market! Stoll masterfully relates his experiences as he cycles around the world. The reader is pulled immediately into the action, the tasteful dialogue, beautiful imagery and a healthy sense of humor. And if that’s all Stoll did, it would be a fantastic book. But he takes it much deeper as he springboards from his experience into contemplations on the meaning of love, life, God, integrity, and his own existence. This book has all the adventure of Barbara Savage’s “Miles From Nowhere”, all the fun of Joe Kurmaskie’s “Metal Cowboy”, the touching lonely romance of Dave Stamboulis’ “Odysseus’ Last Stand” PLUS a universality of thought that all three of those cycle touring classics lack. I can’t recommend this book highly enough!!… I couldn’t believe that this book had escaped my searches until now. ~ Christina T., Amazon reviewer. April 20, 2011

Re-imagine the adventure of a lifetime — 13 hours of entertainment

Read, watch or listen to some sample chapters

In one week, Scott Stoll lost his job, his best friend, his girlfriend and his confidence. Disillusioned with society, full of angst, suffering from depression, and with nothing left to lose Stoll asked himself a question: “If I only have one life, one chance, if I could do anything, what would I do?”

His answer resulted in a 4-year and 25,752-mile odyssey around the world by bicycle using nothing more than a paper map as a guide. Stoll searched for answers to the great mysteries of life, vowing to find happiness or die trying. The quest wasn’t easy. He was imprisoned, held hostage, mugged, run over, suspected of terrorism, accused of espionage, nearly trampled by elephants, wounded, diseased, heartbroken–he nearly died a dozen times. But more importantly, Stoll discovered the wonders of the world, kindness among strangers, the meaning of life, peace, love, faith and—Yes!—in the last place left to look, he found happiness.

Scott won an award for his journey 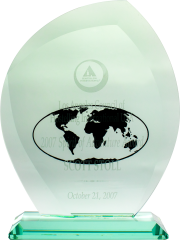 Hostelling International Spirit of Adventure Award
for outstanding enthusiasm and curiosity while traveling. Download the newsletter (PDF) about the award and a nice article about my trip.

Read even more about the journey around the world on a bicycle. Please note: All the generic journal entries have been deleted and turned into a book. I spent a lot of time to craft a book so that you, the reader, can feel like you are actually riding the bike and reliving the journey. That process took me years. It included culture shock, a lot of introspection, some travel around my own country to get to know it again, lots and lots of writing and feedback and edits, a year to produce the book (finding a publisher, design, more edits, et cetera), plus another year to write and record the new anniversary edition.

The question that started my journey: “If I could do anything, what would I do…?”

Free! Get a beautiful and inspirational bookmark with every book purchased.

A montage of photos and videos from Scott’s 4-year, 26,000-mile bicycle tour around the world. Previously a Youtube Feature Video and specially requested for the Boston Bicycle Film Festival. Keep your fingers crossed that someday this will be a feature film with amazing cinematography with all of the world wonders.

I nearly cried watching this video. Just a normal guy and look what he has achieved. ~ Ingrid K.

A bicycle ride around the world begins with a single pedal stroke. ~ Scott Stoll

When I started my journey, I never imagined that I would become an inspiration to millions. My story was featured in newspapers around the world. And this quotation went viral being seen by millions more. More info.

Falling Uphill: The Secret of Life

I’m proud to announce Falling Uphill: The Secret of Life has been illustrated by Poplar Creek Elementary School. This project has involved over 1500 people. BEST OF ALL! — This short and sweet edition is my favorite one! — It took all my years of wisdom to learn to write this simply. More info and samples of the book.

It has been the honor of a lifetime to be invited by the US Embassy and the schools of Argentina to collaborate on this special Spanish edition featuring all-new illustrations from the point of view of the Argentina culture and several new pages just for the Spanish edition. Once again the kids have been so creative that the book truly turned out better than I could have imagined, and now with a whole new level of meaning. More info and samples of the book. >>>

If you read the first book, you’ll love this one. It’s a brand new re-imagined book suitable for all ages, featuring:

More info and samples of the book.

Flip through this book. Watch a video.

Pedal Power: Inspirational Stories from the World of Cycling

New 2017. Scott has a chapter about his bicycle journeys and how his adventures fuel a desire to make the world a better place.

Synopsis: A bike can be so many different things—a simple way of navigating busy city streets or enjoying quiet lanes, a cross-country steed to take a rider up hill and down dale, or even a world-beating racing machine. What unites everyone who rides is that they each have their own cycling story to tell. This book collects inspirational stories from riders around the world, both ordinary and extraordinary, from the London cyclist who rode 10,000 km in a month, to the daredevil trials rider who hops from building to building, to classic tales of grand-tour rivalries and legendary cycling records of days gone by. Essential reading for anyone who loves life on two wheels.

By the Seat of My Pants

New 2018 Edition. Scott has a co-starring role in Edwin Tucker’s “Let the Buyer Beware”. This story is based on the funniest chapter in “Falling Uphill” but from Edwin’s POV.

Synopsis: Humorous tales of travel and misadventure. Lonely Planet knows that some of life’s funniest experiences happen on the road. Whether they take the form of unexpected detours, unintended adventures, unidentifiable dinners or unforgettable encounters, they can give birth to our most found travel lessons, and our most memorable – and hilarious – travel stories. These 31 globegirdling tales that run the gamut from close-encounter safaris to loss-of-face follies, hair-raising rides to culture-leaping brides, eccentric expats to mind-boggling repasts, wrong roads taken to agreements mistaken. The collection brings together some of the world’s most renowned travellers and storytellers with previously unpublished writers. 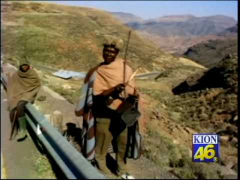 Scott Stoll is interviewed on the Monterey evening news. See him in action on the bicycle. 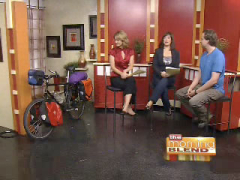 I recently had an interview on a local morning TV show. It was an adventure all by itself. Getting a behind the scenes look at 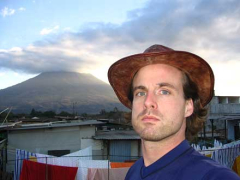 Writing the first draft of Falling Uphill in Guatemala

I wrote the first draft of Falling Uphill in Antigua, Guatemala. Often I took notes while atop the roof of my hotel below. Doesn’t this look like an author’s dream? I recommend all writer’s to get of their box and go somewhere inspirational.