And 3 strategies to achieve the impossible

Editor’s Note: I’ve been following Rachel’s adventures for a while, and I can say I’ve been jealous and inspired more than once, especially with her recent bike ride across Mongolia. We’re honored to have her as a guest, and she reminds us that despite the obstacles that “the important thing is to keep on traveling” so we have a new appreciation for our home. More below about how to follow Rachel and Pat at 66 and 50 years young.

Update 2017-05: Read an update on our story about Rachel’s world bike tour. Boise couple sees “a thousand lives you might have lived” on worldwide bike tours.

“At the end of this year, I’m going to New Zealand to cycle”, I heard myself tell the older gentleman next to me on the ferry. This summer day in 1992, the ferry from Seattle to Bainbridge Island was full of cyclists on a two-day fundraising ride for the American Lung Association. This was the first time that I had said that out loud.

About a year before, I found myself without obligations dealing with the pain of ending a long term relationship when the idea of cycle touring started to form. I bought a huge poster board and started putting writing on it things I would need if I did a cycle tour. Things like equipment lists and documents required, even a postcard from a friend of the Great Wall of China because the idea seemed to be a big hurdle. And encouraging quotes like:

“Only those who dream the absurd, achieve the impossible.”

That’s what it felt like, an absurd idea. I was 42 years old and had never before cycle toured, except for when I was 5. I put some underwear in a paper bag and headed out on my tricycle and got about three blocks away from home before mom found me. However, once saying it out loud that I was going, things changed. I went back to all the lists and started doing what I needed to do to go.

This was my first lesson learned. The moment I switched from thinking “I’d like to”, and saying “I’m doing”, I did what it took to make it a reality. At my core, I became a traveler touring by bike.

To achieve what seemed impossible, I had three strategies:

When I first travelled solo in 1992-93 in New Zealand and Australia, there was no internet and no connection with others travelling by bike. So how have things changed? Any contact with home was through mail collected every couple of months at Poste Resantes. I had one rule, that if I had a bad day and wanted to go home, I would wait a week. And if I still felt that it was the right time to stop cycling and return home, then I would go home. I never had to make that the decision. Handling money was with Traveller’s Checks, and personal checks from a home account to replace the Traveller’s checks at any American Express Office. I pre-paid the AmEx credit card with a large fund and used it like a debit card. What a difference nowadays with ATMs everywhere.

My goals for the tour were twofold: to learn how I did things, outside of a partnership, and to look at the consumerism in my culture, then I watched myself go about buying a new bike, buying a new sleeping bag, buying a new tent; all the stuff I was going to need if I really did this.

In 1993 in New Zealand, I met a Dutchman who was cycling around the world. Six months later January 1994, we met up again in Africa, cycling from Capetown to Nairobi. This is when I learned a lesson about the consumerism of my culture. The western world has a billion-dollar industry to sleep outside and cook on a fire and we call it recreation when this is how many people in the world live. For example, a dinner at home, we turn out the lights, light a candle and call it a romantic dinner. Many parts of the world people light a candle out of necessity. We are doing the same things but from a different reason.

Travelling by bike is the ultimate freedom. On a bike, you become part of the scenery; the landscape is not framed by a window. Slowly, you see snapshots of people’s daily lives and can interact with them. An unknown author of a favorite quote: “Travelling lets you see a thousand lives you might have lived”. The day gets down to basics of where to: eat, find water, and sleep…then chores like laundry every few days. On a long tour, there is a tension between constant change and a longing for something familiar (usually food) and routine. Every day is different yet the same. When I first started out on tour, I watched myself develop routines in the midst of the daily changes. Then over time, I watched as I changed those routines. Except for the routine of how I packed my panniers. I found doing that the same way, things in the same place; I was less likely to leave something behind.

What happens when you go home after a long cycling tour

The biggest lesson I learned was coming home after two years on the road. When you first take off on an extended tour, it takes a few months to shift from the feeling of being on vacation to feeling like the road is home. The road and being away from home becomes the new reality. The reverse happens once the tour ends and one can long to be on the road again. When I returned from my first big trip, I stayed with my mom in a small town for a few months and got a job in the neighboring town. Driving to work one morning, I came around a corner that I had driven so many times growing up. The light hitting the gentle waving wheat was beautiful; I thought, if I was still on my bike and a traveler, I would have stopped and taken a picture. When you keep the curiosity of a traveler, the ordinary becomes the extraordinary. We often think travel means going far away to exotic places and we miss what is in our own backyards.

Our favorite quote explains the beauty of bicycle touring perfectly:

“Go fast enough to get there, but slow enough to see.”

So what might be your absurd and what is keeping you from achieving the impossible?

The Dutchman I met is my husband, Patrick. We married in Missoula, Montana, July 1995 and settled in Boise Idaho. Our honeymoon was a two-wheeled one through Glacier and Yellowstone National Parks. This was actually a challenge. We were now no longer two independent cyclists cycling together, so we did have an adjustment making the shift to a married couple. Cycling is a big part of who we are, having three times now quitting our jobs to cycle tour, yet we like our home in Boise just as much. After 21 years of being married on the 3 tours we’ve done, we’ve cycled together in 52 countries.

In 1999-2000, we cycled 9 months in South America: Santiago, Chile to Ushuaia, then Buenos Aires to Cusco Peru. In 2006-07, we biked from Bali to Bangkok, then through Cambodia, Southern Vietnam, Laos and into Yunnan China and across Eastern Tibet (illegally!) to Lhasa, and continued on the Friendship Highway to Katmandu. Next, we flew to Alaska and officially started cycling home to Boise, Idaho from the Arctic Circle.

We are presently on another tour, on the same bikes from 1992, leaving April 2015 in Patrick’s home village in Holland, across Eastern Europe, Africa, India, Nepal, NW India. I’m writing this in Ulanbataar, Mongolia ending the Central Asia part of this trip before returning to SE Asia.

Now we are on the road again since April 2015 starting in Patrick’s village, Ossendrecht Holland. We are riding our same bikes from 1992. We celebrated our 20th wedding anniversary in Goering, Georgia and the 21st in the Pamirs. This time we cycled from Nairobi to Capetown before flying to India heading to Katmandu and more…connecting the dots.

Each time that we have ended a trip, we were left with wanting to do more.

And exploring our own backyard in Idaho!

The important thing is to keep on travelling.

You can follow more of Rachel and Pat’s bicycle ride around the world: 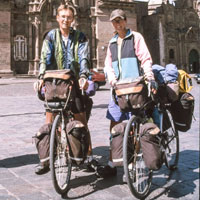 The Dutchman I met in Africa is my husband, Patrick. We married in Missoula, Montana, July 1995 and settled in Boise Idaho. Our honeymoon was a two-wheeled one through Glacier and Yellowstone National Parks. Cycling is a big part of who we are, having three times now quitting our jobs to cycle tour, yet we like our home in Boise just as much. After 21 years of being married on the 3 tours we've done, we've cycled together in 52 countries. Each time that we have ended a trip, we were left with wanting to do more. But we feel that the adventures you can have in your own backyard are just as important. 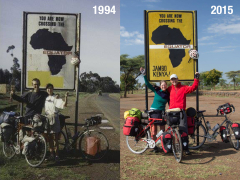 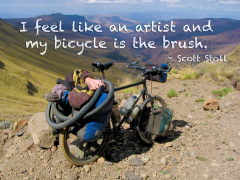