If constellations had been named in the 20th century, I suppose we would see bicycles.

This inspirational bicycle quote from Carl Sagan is a great example of how astronomy isn’t just a science, but a passion.

Our discussion of popular space projects, such as SETI@home and, on some level, ClubMir, would be incomplete without paying tribute to the man who inspired them and who spent his life bringing science to the layperson. Carl Sagan — scientist, philosopher, and poet — popularized science, an otherwise cold discipline reserved for the academic world. And with his eloquence and humanity, Sagan brought science to the foreground for all of us to poke at, question and marvel.

His 1980’s television series Cosmos discussed other galaxies, challenged our notions of planetary systems and probed the origins of life. But unlike most scientists, Sagan didn’t dismiss the topics of science that captivated people’s imaginations and fantasies such as astrology, UFO’s, the possibility of extraterrestrial life and the theories of space travel.

His other works, including the novel, Contact explored religion and the existence of God. In these explorations, Sagan mastered the rationality of the world, without diminishing his reverence and wonder for the universe. In regards to the afterlife, Sagan said, “I know of nothing to suggest that it is more than wishful thinking. The world is so exquisite, with so much love and moral depth that there is no reason to deceive ourselves with pretty stories for which there is little good evidence. Far better it seems to me, in our vulnerability, is to look death in the eye and be grateful every day for the brief but magnificent opportunity that life provides.”

Sagan further noted that “You can’t convince a believer of anything, for their belief is not based on evidence, it’s based on a deep-seated need to believe.” Yet Sagan never took the elitist stance as a disciple of the scientific world. He humanized it, making it less sterile. He renamed the scientific method, “The Baloney Detection Kit.” And he admitted that science at times had been wrong. However, if a hypothesis is wrong, “it provides a structure to find out what’s right.” Indeed, Sagan had the ability to enlighten the world while at the same time, humbling us in our humanity.

While Sagan is not responsible for the discovery of any scientific law theorem, or Truth, what he has accomplished during his short life is perhaps more important. He stood on the platform of reason and taught us to experience the world against the backdrop of the scientific method. He never discovered Truth, as Truth has always been. What he did do, is give Truth a voice, and opened us to the possibility of doing the same for ourselves.

But as science goes, new ideas must survive the most rigorous standards of evidence and scrutiny. And Sagan never stopped scrutinizing. “Somewhere,” Sagan said, “something incredible is waiting to be known.”

Photo Credit: Images of Jupiter and Voyager were provided by NASA and then artistically combined. 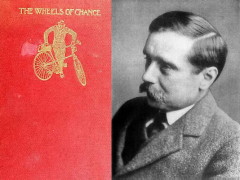 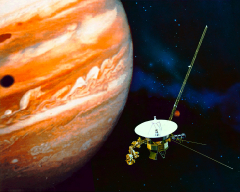